The Battle Against the Proposed School Funding Cuts

It’s no secret that school budgets throughout the country have been under pressure for a while now. School leadership teams have been coping with the funding challenges, leading to a number of tough decisions being made over spending, including future staffing levels. Every school’s situation is different but they are all experiencing severe pressures.

The National Association of Head Teachers (NAHT) has shown that more than half of school leaders felt that their budget would be untenable by 2018/19. The National Audit Office estimate a £3 billion real terms cut across all phases and in all schools.

The recent headlines have been caused by a proposed new funding formula for schools, designed to create a fairer allocation. However, with increasing costs placed onto all schools the new formula will not bring the benefits that schools had hoped to see.

The School Cuts website (produced by the NUT, ATL, NAHT & GMB) analysing DfE data, projects that schools in Cumbria will lose £27.8 million per year in total by 2019. For example in Eden, in our cluster of 9 primary schools alone, we are projected to lose around £434,000 per year by 2019.

Head teachers across Eden have written to parents explaining exactly what is happening and as always, leaders will work hard to ensure that cuts have the least possible impact on teaching. However, rising costs and a frozen budget mean that tough decisions will have to be taken. Schools cannot guarantee that such cuts will not impact on teaching, despite doing their utmost to prevent this.

This is taken from a recent letter by primary heads in Cumbria sent to parents.

Across Cumbria, and the rest of the country, a number of protest marches and demonstrations have taken place so school leaders, teachers, students, parents and the community can get their views heard.

The first march in Cumbria was held in Penrith, the home of North Lakes School on 6th May. Hundreds of people attended the peaceful protest held at the Cornmarket. There was a great deal of passion and commitment from the speakers, organisers and the entire community.

You can see a round-up of the whole rally ‘This wouldn’t happen at Hogwarts’.

Katie, a year 5 pupil from 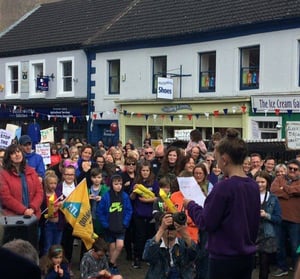 North Lakes School, was so inspired she decided to address the crowds with her #WakeUpWestminster speech.

“Good Afternoon. My name is Katie and I am in Year 5 at North Lakes School in Penrith. At the moment, schools are going through a crisis and it is not just adults that are concerned about this but children too as it is us that will be affected by any cuts in education.

I believe, that at a school, it should not all be about Maths and English. Every child deserves an exciting, varied curriculum and yet we will not be getting any of that if these cuts go ahead.

SO WAKE UP WESTMINSTER!!!

I am 10 years old and even I can see that this is no way to build a successful future in education.

Watch Katie speaking at the rally.

I addressed the rally talking about the power of social media to get our message across. It’s important that everyone makes their views known and it’s crucial the rallying and protesting does not end. I urged everyone there, and everyone reading this blog too, to post a Tweet a day with their messages and pictures from the rally to their MP using the hashtags #schoolsjustwannahavefunds #schoolfunding and #wakeupwestminster. If everyone retweets and likes we can spread the word, get our message noticed a make a difference.

Footnote:  Headteachers in Eden wrote to parents in early May regarding the Cuts: their letter can be viewed here.

We want to support schools to share how the proposed funding cuts will affect you. Let us know the impact it will have on your school, what actions you are taking and how you are spreading the word.

Frog Education on the shortlist for the Education Investor Awards 2018
We’ve always said that teachers know best!
Save your school money and increase the quality of education!